betweentheshelves's review against another edition

We take a bit of a break here from volleyball as some of the team passes their exams which works well for pacing! Still love this little group of characters so much. I really need to watch the anime at some point!

sugoitan's review against another edition

aaaa i can't believe im like, smarter than both kageyama and hinata lmao dumb bitches i love u both. im so freaking excited to see karasuno get pummelled in their practice games ma'am the gROWTH they will have *chef's kiss*. ushiwaka is so boring like his entire characterization is based on brute force like okay, ace. also, lev haiba has no business being that tall wtf a whole FOOT taller than hinata. he's japanese *and* russian talk about blessed genes.

also!!! bokuto and friends appear in this volume finally my owl babies!!! yachi is so precious and she’s so me i guess?? in the anime this would be a third i think of season two i want to catch up so badly >~

reallife_kazbrekker's review against another edition

Can't wait to read the next one!

themoonwholistens's review against another edition

This counts as my review for the whole Haikyuu!! manga

READ FOR: best character developments and themes that I have ever encountered
READING LEVEL: Level 1-3 out of 5

I don’t think I’ll ever have enough words to express how much I love this manga and anime series but I’ll try anyway. But I just need to make it known that this has changed my view in anime and manga forever. I caught up with this manga in the last 30 or so chapters but I won’t say much to avoid spoilers... but it was crazy.

It made me laugh, cry, fall in love, think, and honestly... what else do you need in a series? I can keep going on and on about this series but honestly I think you should just read it for yourself. I really don't think you'll regret it.

When someone asks me what the plot is, honestly, all I can say is “they play volleyball” HAHAHA… but it’s so much more than that.

PLOT: ★★★★★
The plot was so well thought of from the very beginning and when I re-read the manga I can’t believe the amount of foreshadowing Furudate actually placed. My mind was so blown… I just. No words. I am seriously in love.

ART STYLE: ★★★★★
The art style… *chef’s kiss* especially in the later arcs. There were so many matches but even then Furudate never failed to leave me breathless at each one.

CHARACTERS: ★★★★★
The character development here is THE BEST. HANDS DOWN. that I have ever come across. I fell in love with the so many characters in this series that I did not even think that was possible.

The character relationships... the character dynamics... their mindsets... they are all so perfectly well done and realistic GAHHHH I've said this so many time throughout this review BUT THEY JUST MADE ME FALL IN LOVE SO EASILY. I can't pick my favourite one but hinata and kageyama just hold a special place in my heart.

This connects to the themes but my favourite thing that was done with the characters here was that each one of them embodied a theme or a message that the author wanted to get across. Those are spoilers so I won’t really talk about it but just know that it was one of the main reasons that made me go so crazy about this series.

Note: if you think this series is focused on only 1 team... you're in it for A RIDEEEEEE


I'm getting chills just looking at and remembering these panels ^^

THEMES: ★★★★★
Honestly I basically thought the themes were just gonna be “teamwork” and “friendship”… while it is all that, Furudate sensei was able to make it even deeper.

I think the one that was focused on the most was “It’s not always about winning, it’s about growth”. But there were also so many smaller things that lead up to that bigger point: (1) we get our strength from others, (2) but you also need to make yourself dependable, (3) there is always room for improvement, (4) working hard is good but overworking yourself isn’t, (5) you are built on the small things you do everyday, (6) an ace's back should be an inspiration to your teammates (hi bokuto), (7)+++

The way I wrote it was very straight to the point but I was amazed at how Furudate tackled the so many messages that I received from this series. 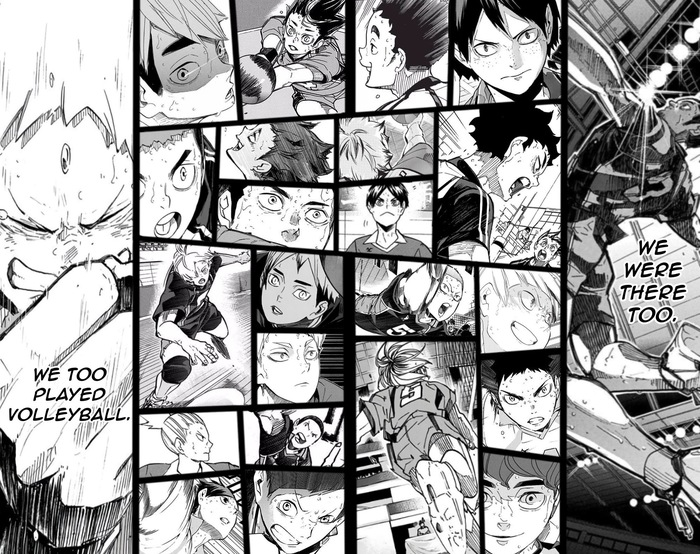 PACING: ★★★★★
THE TIMING. OF EVERYTHING. JUST MAKES SENSE.

It’s so realistic that I want to cry. (I actually already did… a lot of times.)

You should understand that I made this review weeks after I finally calmed down about this series cuz I was really going crazy about it HAHAHA if you have finished this series too or met me while I was reading this, you know what I’m talking about ;)

I'll keep this series close to my heart until the grave. You cannot convince me otherwise.

yoda32's review against another edition

While I continue to adore this series, volume nine has been my least favorite volume so far. It started off so slow... and continued that way until the last three chapters! I’m also not happy with what I’m seeing at the end there and I’m hoping this series won’t go in the direction I think it’s going in.

On the other hand we have a new member to the series - Yachi-San- she’s the sweetest thing and I already love her evolving friendship with the team and Hinata. We’ve also got some new opponents/enemies and I’m so ready for the boys to wipe the smiles of their faces!

Overall not my favorite issue but I continue to love this series and I’m curious to see what’s to come!!
More...