puppy_eyes's review against another edition

First of all, this book is huge, I'm talking over 600 pages. That's the size of Harry Potter books, lol. I certainly was not expecting that, but I was delighted to feel like I was getting my money's worth. To compare the size of most normal volumes, I grabbed a random Volume (Red Hood and the Outlaws Vol 2.) and held it side by side.

You could fit years of volume runs in the size of this book! But now, more importantly, is this maybe should have been cut down to 300-400 pages? I love, loved the arc, especially with Nightwing using his 'officer Grayson' persona to help investigate, but there was just so much that has nothing to do with the main arc included in it, I started skimming the last few 100 pages, where it actually started to matter.

I understand why some of it couldn't have been taken out, because when you flip the page, dialogue from the previous scene was on the new page, and without the context of the previous scene, it wouldn't make sense. But some of it could have been taken out and the book would lose nothing for it. Instead of it being just the 'arc,' it was more like 'every single thing going on from the start until we finish it.'

For me, I would've been fine with cutting out the random crime fighting like because those belong in their own character's volumes. I couldn't help but wonder why they just didn't include the parts that actually cut to or were involved in the actual investigation.

Mostly because it's jarring, when a scene starts, and then it gets cut off to another scene. Later on, you see the same characters show up again, but the previous scene that started was finished 'off screen' without explaining what happened when it didn't even need to be started in the first place.

The thing I remember being most shocked by when I first read it, was the idea that "Bruce Wayne" is Batman's mask. That always stuck with me for a long time. That his mind is just so... compartmentalized to the point where he has to cope in this mental way, and it's remarkably fascinating.

But it was interesting just as much, how they tried to plead to the "Bruce" side of him by reminding him of his connections. Dick saying, "Well then who was I raised by if it isn't Bruce Wayne?" or Doctor Leslie, who said that Batman couldn't help with all her lack of equipment, but "Bruce Wayne" could. That made him think for a second, since he had promised before to devote his wealth to help do more good, but throwing away his "Bruce Wayne" by saying he doesn't exist anymore makes all of that obsolete.

I also love how each of the people closest to him disagreed over the possibility that he could ever kill someone. They all handle it in their own way. Tim is doubtful, because he's not as close to Bruce as Dick is, and Barbara tries to explain to Dick when he gets upset that Tim is doubting him. From an outside angle, it would look like what it looks like. Dick is 100% sure, but Tim knows he'd say that no matter what, because it's blind loyalty. He's been drilled with the concept since his time as Robin, that Batman might as well be a God to him. I felt like cheering him on when he was trying so hard to investigate his way through the documents and evidence to clear Bruce's name, his determination really shows here. He was so upset when Bruce was pushing him away and refusing his help, and even hinted at blaming himself for being away so long to work in Bludhaven. "I don't think I'll ever make him happy." But while Dick is the heart, Barbara, meanwhile as the head, tries to stay neutral, and use the physical evidence to get to the bottom of it.

She would have made a great lawyer, if Bruce hadn't pushed her away from it. This upset her, and I could understand why. I think it's a little hilarious that Bruce Wayne goes to jail, and then in 'also big news: Batman disappears.' like no one can make this connection.

And what about the bodyguard? She disappears from the story during the later half, but even after Bruce breaks out, he doesn't go back to try and rescue her. I get that he won't bother trying to clear his name because he seems upset that anyone would think he'd break his own rules, but the worry he puts on Alfred seems unjust too.

I just wished that they'd skip the random crime, the checkmate case, the drug case, the nicodemus case, all those side cases, and just focus on the investigation. Still though, glad to get my money's worth in a thick volume.

I did crack up on one line. How embarrassing to stand there and listen to this! 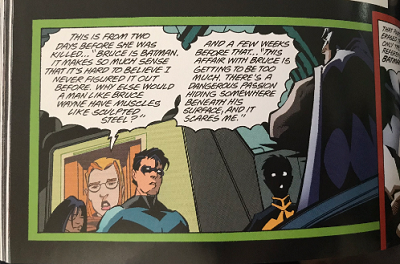 this did not need to be so long…

pandorasirens's review against another edition

zoidberg684's review against another edition

Reading this volume is often an exercise in frustration, much like putting together a jigsaw without having the overall picture to guide you along the way. The overall story is completely disjointed because it spans 5 (or 6?) different titles. More than once, we actually jump back in time on switching titles. There is a good story in there, somewhere, if you have the patience and the skill to piece together this particular jigsaw in your head as you read along. If you do manage that, there are moments of brilliance in this book that make it worthwhile.

abhijeetgaiha's review against another edition

There is a great Batman story in there somewhere, something deserving of more than 3 stars. Unfortunately, it is surrounded by a significant amount of filler material stretching to almost a third of the book. This bumps it down to the aforementioned 3 star rating. Filler material is the bane of many a Batman tale, which is why the absolute best tend to be one-shots or mini series like [b:Batman: Year One|59980|Batman Year One|Frank Miller|https://d.gr-assets.com/books/1327940389s/59980.jpg|2501570] or [b:Batman: The Dark Knight Returns|59960|Batman The Dark Knight Returns|Frank Miller|https://d.gr-assets.com/books/1327892039s/59960.jpg|1104159].

It was a disappointing conclusion to me after Bruce Wayne Murderer?
I felt as though the story wrapped up much earlier than the book ended and it was a scramble to make it seem it longer

saemiligr's review against another edition

I finally had to just put this one down, I've been trying to read it for so long. I like the art well enough but the story is all over the place and clearly pieced together by different people. It just gets annoying and it feels like batman is just having a temper tantrum. And it's not even one complete story.
More...