smessmores's review against another edition

I enjoyed it overall (as I do pretty much any Discworld book) but parts of it felt unexplained or left out even by normal standards at the end. I just wanted a little bit more that I didn't get.

tasadion's review against another edition

Death books have always been the weak Discworld novels for me. Still good fun, picked up some music jokes I’m sure I’ve missed before (“Certainly Dwarves” lol) and I do like the Susan character, but it lacked the social commentary that make Night Watch novels so strong.

colossal's review against another edition

Part of the Pratchett reread with the SpecFic Buddy Reads group in 2018.

Death takes a break at about the same time as the Discworld latches on to yet another passing concept from elsewhere in the multiverse: Music with Rocks In. Ankh-Morpork gets hit hard by the arrival of some new musicians and soon the whole city can't get enough of the new music, particularly including some of the Unseen University faculty. Meanwhile, with Death missing, the role is picked up by his young granddaughter, Susan Sto-Helit.

In structure this book is very similar to [b:Reaper Man|34517|Reaper Man (Discworld, #11; Death, #2)|Terry Pratchett|https://images.gr-assets.com/books/1389211958s/34517.jpg|1796454], with two main plots that barely intersect. There's the Wizards dealing with the new music (including the first glimpse of what will later be called Hex) and the band that is playing it, and a parallel plot dealing with Susan and Death and their grief over Susan's parents deaths.

Like Reaper Man, the Death plot is the star, and while it has moments of humor the way that grief is affecting both of these characters is quite profound as is the relationship that they develop because of it.

I do think that this is a slightly lesser work in the series, if only because the A-plot is a bit pointless, and the B-plot has the heavy lifting of introducing Susan. I think the processing of grief that both Death and Susan are doing throughout is very subtle and extremely well-handled. 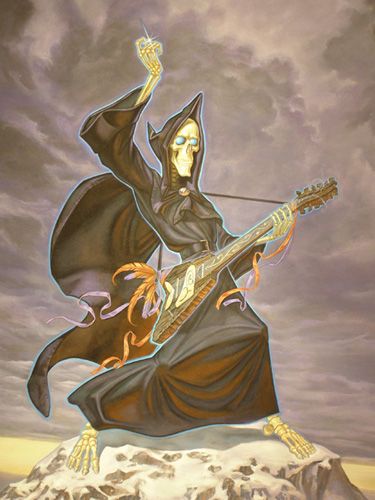 Music is immortal. Some say it has always been there and always will. Some can apparently hear its beat. Like the pulse of the universe itself. I think Terry Pratchett had that same kind of appreciation for this particular art.

In this 16th installment of the phenomenon that is the Discworld series, Death has a family-related crisis so he goes away for a while. Unlike the last time, there is someone to take over though and the Death of Rats and Binky are getting her. Yes, HER. Susan, Death's granddaughter (who is kinda blissfully unaware).
As she learns to wield the scythe as much as her unique form of memory and everything inherited from her grandfather, music arrives on the Discworld in the form of a guitar bought in a peculiar shop (think of the "woodcarver shop" in Pixar's Brave). It wants to be played and not by anyone.
Thus, we are treated to a grande tour by some ... music with rocks in it.

Along the way, we get a lot of musical references many of which even I understood *is very proud of herself* and which added to the hilarity of the absurdness unfolding in Ankh-Morpork, the Unseen University and many other places. Underwear being thrown onto the stage was the most innocent of the incidents. *snort-giggles*

A wonderful adventure through dark alleys, in stinking taverns, along sharply winding roads and up on stages that is the introduction of one of the best characters, apparently: Susan. I already liked the novel with her future father way back when, but she's even better, especially when paired with a talking raven and the Death of Rats (Binky is not to be underestimated either).
Though I have to say that the Librarian, Ridcully and the other wizards were marvellous, once again, as well.

Moreover, as is almost to be expected especially from the novels about Death, the author had a wonderful way of weaving pop culture references with action and, most impressively, resoundingly deep and important messages about life (and death) itself.

mizannie's review against another edition

My name is Annie and I'm a Discworld-aholic.

chiara11's review against another edition

ginpomelo's review against another edition

octavia_cade's review against another edition

This is one of those Discworld books I enjoy but just don't love. It's paired, in my mind, with Moving Pictures, which was also a three star read for me and for much the same reason. This is a clever book, full of references to popular music but again, the emotional heart isn't there for me. There are some nice moments between Susan (one of my favourite Discworld characters) and Death, but every time I settled in to enjoy those I'd get dragged back to Buddy, whom I don't care about at all. By the end I'm ready to boot him off the cliff myself just to stop him interrupting the good bits.

Still a fun read, but one of Pratchett's more average efforts I think.

bent's review against another edition

A fun book, a little manic and I found the music puns started to wear on me a book. I actually found the plotlines with Death and his granddaughter, Susan, more interesting than the whole rock band ones, but the book focussed more on the rock than the others. It started to seem a little repetitive in parts, with scenes created just to throw more puns in. A good book, but perhaps could have been a little shorter.
More...