cathepsut's review against another edition

Nice prologue with new warriors, wanting to pick a fight, looking for material for their Reality TV show. It‘s all about the ratings.

Something goes horribly wrong, something major is blown up, children are killed. Tony Stark is blamed and attacked for financing the Avengers and supporting reckless young Avengers not upholding the law. THINGS TURN UGLY.

And, same as in the movie, Tony is willing to work with the government and to become more accountable for the actions of superheroes... 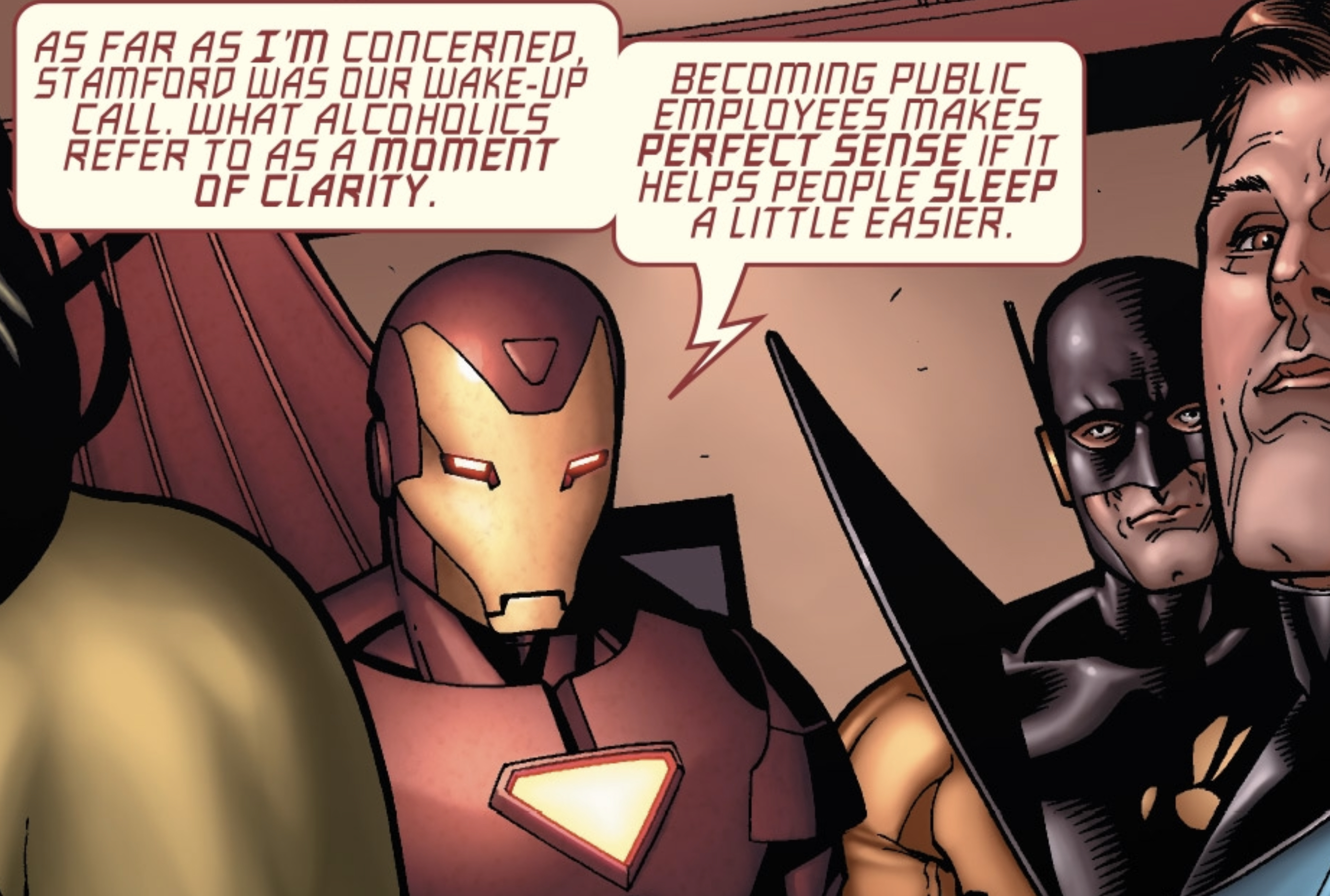 And, also as in the movie, Captain America is not a fan of the idea. For him the Avengers have to be above government control, lest said government starts to tell them who the bad guys are...

We go to Wakanda to meet T‘Challa, we visit Dr. Strange in New York, we go to Westchester to meet the X-Men. This encompasses pretty much everybody from the Marvel Universe. Tony is rounding up the troops. So is Cap. He and his Resistance group are getting into the undercover lifestyle... 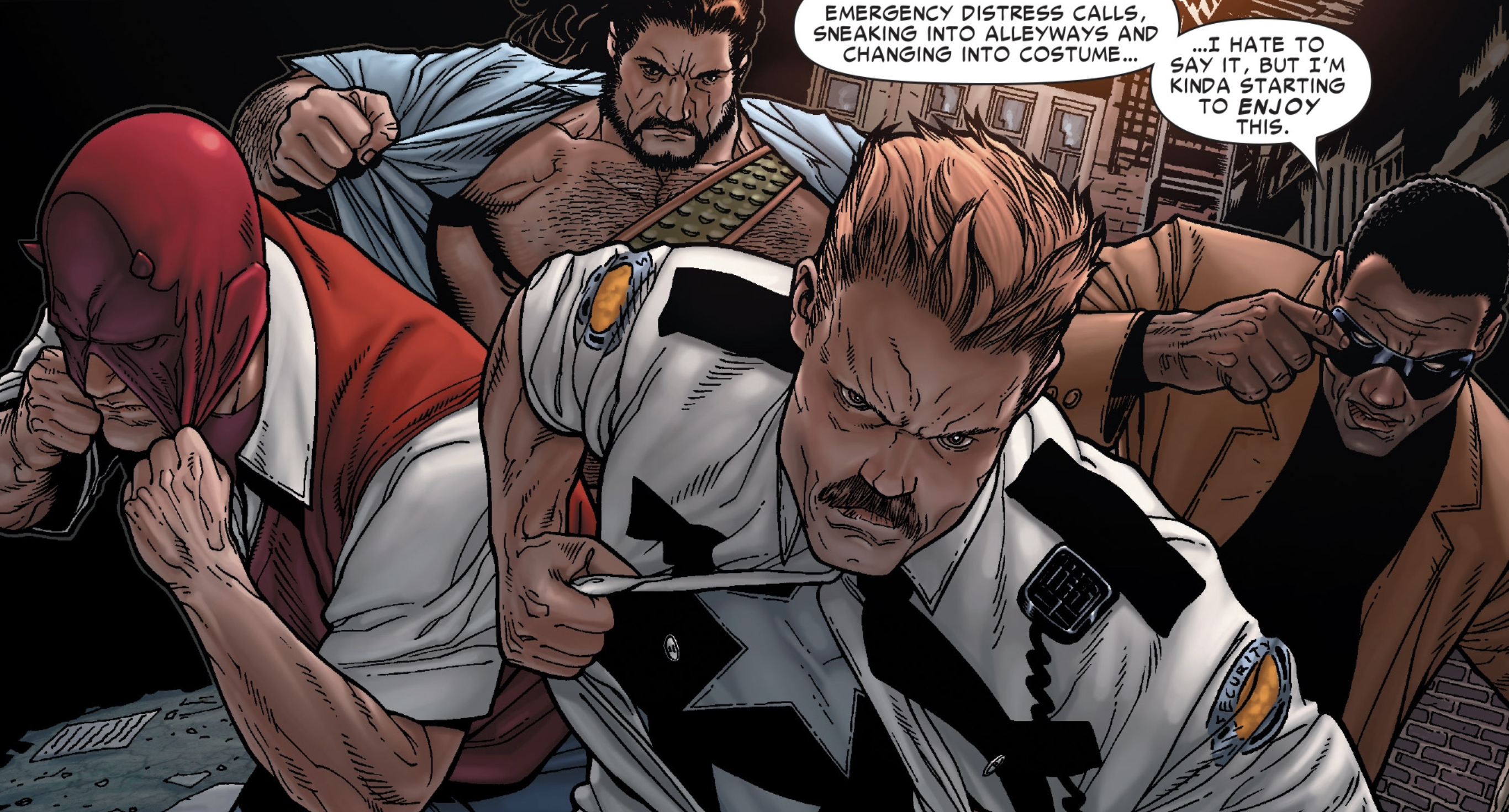 I was rooting for them, although I could see Tony‘s point of view as well. It‘s really hard to not end up disliking him massively for his course of action.

Things go to hell in a hand basket really quickly! There are a lot of fight scenes with tons of characters, things become very violent and grim. Lives are ended. Allegiances are questioned. This was darker than I expected.

I liked the final battle and its aftermath.

Bottomline, this was gripping enough for me to read it in one sitting. However, the multitude of characters was a bit too much. I had a hard time telling them all apart. And as I am not a hardcore Marvel fan, I really didn‘t have a clue who many of them were. Maybe fewer characters and instead more depth and character development would have been nice.

carolinatestone's review against another edition

lauren_ofs's review against another edition

I really enjoyed it, missing some of my favourite characters but yeah really great!

dorothysbookshelf's review against another edition

Wow. I’ve been a huge fan of the MCU for years, and this was my first venture into reading the comics. And let’s just say that I am far from disappointed.

This edition is a collection of each of the 7 issues in the ‘Civil War’ event. With breathtaking art by Steve McNiven, and amazing writing by Mark Miller, this book was every I could have wanted.

The costume art was spectacular, and the small symbolic details scattered in each panel was extremely clever, and helped foreshadow plot twists.

Whilst reading, I was very nervous to see how it would end, and whether it would be anti-climatic or forced. Luckily enough, the ending was neither. Instead, everything was tied together extremely well.

It was great to read the book which inspired the film of the name, and I really enjoyed seeing the character developments fleshed out on page, as well as finding out which sub-plots they left out of the film - my favourite of which is the involvement of the Fantastic Four. I only wish I could have seen more of Doctor Strange.

‘Civil War’ exceeded all of my expectations, and I will definitely returning to read more Marvel comics, events and volumes.

“Whose Side Are You On?”

This is an AWESOME start to the series!
I've been planning to read [b:Civil War|91714|Civil War (Marvel Civil War Collection)|Mark Millar|https://d.gr-assets.com/books/1345813608s/91714.jpg|577888] even before watching CAPTAIN AMERICA : CIVIL WAR, since I heard that the comics included much more details to the story where all the tension was built up. And of course to see all of those other characters that are originally involved in both teams!!!

In this issue, we pick up where the school yard has just been blown up in a clash between the New Warriors and house of others- Cobalt Man, Coldheart, Speedfreak, and Nitro. Many super heroes are working to find survivors while worrying about the consequences this even will have. At the funeral for all of the children, a grieving mother spits in Tony Stark's face and attacks him verbally- saying that her sons blood is on his hands. Soon, things all over become very violent...and the super heroes begin taking sides.

The drama has been laid out so well that no one is the enemy. But at the same time, no one can truly be the hero when the line between right and wrong is marred. It's hard to know who to side with. I still haven't made my decision. Maybe I will soon...

"As far as I'm concerned, Stamford was our wake-up call. What alcoholics refer to as a moment of clarity. Becoming public employees makes perfect sense if it helps people sleep a little easier."

Once upon a time i had an acquaintance/friend who also liked reading marvel comics. We both saw this title in a gorgeous hardcover for just 15 euro! He bought... I actually can't remember which superhero civil war he bought but we had a pact we would exchange the comics.

That never happened and now I'm actually glad. This isn't my favourite storyline. I don't want all of my favourites fighting each other. Even if i understand how unrealistic that would be.

So I will check out some other titles and for now I'm content to stop reading this storyline.
More...