A review by pygmypuffbooks
Fable, by Adrienne Young 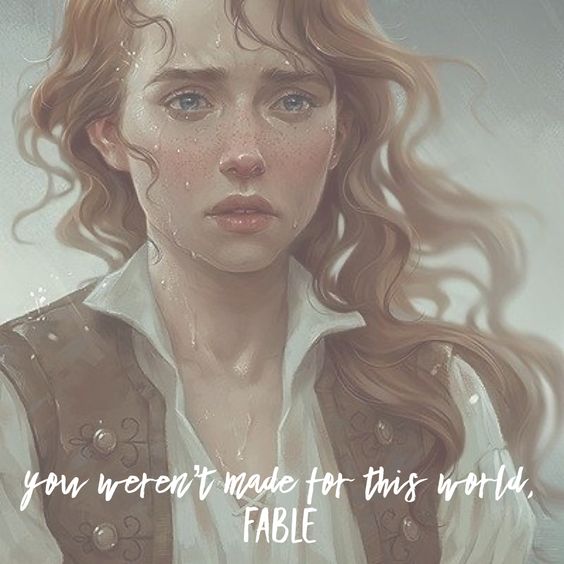 This was the first book that I have read completely by Adrienne Young, and I have really enjoyed it. It was fun and entertained me quite well, even though there were some things that I haven’t enjoyed as much.

First of all, the world wasn’t built well enough for me. I didn’t expect some Lord of the Rings detail of world building now, and I also understand that you can’t really build a lot when most of the story takes place on sea. For me, personally, there wasn’t enough for me described and I wasn’t able to fully place myself into the story.
Granted, it is really hard to build a lot when most of it is just water.

For the characters, I really loved Fable and Saint. They were really well built characters for me with a lot of depth and you could really understand their situations and where they were coming from.
Mostly, I was feeling really sad for Saint as, in my eyes, he didn’t really deserve a lot of the hate from Fable.
Coming to the crew, the only ones who had a little bit of personality and character were Willa and West. Sadly, I didn’t really feel that connected to them as I wanted to.
The rest of the whole Crew was just pushed into the back a lot, which was really sad for me as I wanted to really know more about the LGBTQ+ relationship the crewmates had.

When talking about the characters I will also need to mention the relationship/romance between the main characters. For me, the story could have been great without the aspect of this relationship as well. It didn’t really bring a lot to the table and also felt a bit pushed. In my opinion, it was unnecessary.
Through the whole book both of them didn’t really have any chemistry and there were no indicators as to any of them liking each other in a romantic way.
Pushing this romance in there, especially in the last few pages, was a bit too much for me.

Now I will talk a bit about the pace of the book. It was really slow and dragged on a bit. Nothing much happened except in the last 10 to 20 pages, where so many things happened back to back. I somehow felt a bit overwhelmed as the pace literally made a 180.

Overall, I really enjoyed this book. It was enjoyable and I loved that it was a Fantasy on the sea. Sadly, I wasn’t able to connect too much to the characters, so that I wasn’t feeling many emotions while reading the book.
If I could have connected more it would have been a really good 4 Stars for me.

I would recommend this book to people who are looking for adventures on the sea/on a boat. Be warned that it is not really past paced, so if you don’t enjoy books like these, it might be a bit boring for you.
The writing was also easy enough to read for non-native English speaking people.

I will definitely read the sequel to this book probably anytime soon as I already bought it yesterday.